BOYS IN THE DOG BOX

The other day I went for my routine visit to one of our Regeneration centres in the bush veld of the Limpopo Province. This is a new facility and had been open for less than four months. When I got there my colleague and friend, Tokkie van Wyk, who is also the director, asked me to spend some time with the boys in the Dog Box. There were eight of them who were being punished because of various infringements of the rules. Some of them had run away but they came back voluntarily after a few days’ absence. 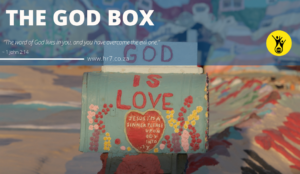 I started questioning them as to the reasons why they had purposefully broken known rules. After working through the normal lame excuses addicts have on hand so readily, we managed to get down to some serious discussion on the causes of their miscreant behavior. Most of them eventually admitted that they really did not know and wished that they could stop because they were tired of always being in trouble. When I could see that the atmosphere was properly charged with the expectation I asked the guys who ran away something along these lines.

“Before you guys decided to jump the fence and take off, what was going on?”

At first, they were perplexed but after some more probing questions, they started to catch on to where I was leading them.

A WAR OF WORDS

One evening after their normal daily activities, they were relaxing in their bungalow just chatting small talk. Just innocent idle chatter. However, this led to recalling some of their drugging experiences which led to boasting and comparing notes and eventually when the conversation died down and they were alone in their beds, all sorts of memories came rushing back into their minds. Suddenly the war of words was running amok in their minds.

THE MIND GUIDES THE HEART

The next morning they awoke feeling uneasy and broody all day. During that evening the plans were being hatched to jump the fence and take off to their old stomping grounds about which they had been dreaming and started longing for. We had a rather lengthy discussion on how words can affect our minds. Once the mind is under the control of seducing spirits, the heart is very easily stirred up with evil desires and burning passions. Once the desires are spoken out the next phase of Satan’s strategy kicks in namely the plan of action. I pointed out how the tongue can set a runaway bushfire in motion with disastrous results. Now that they understood how important it is not to talk about or discuss past incidents which entailed the former lifestyle unless it is under the direct guidance of a counsellor who has a specific purpose in mind, I went on to instruct them from the Word of God how to positively apply this same principle. I took them to 1 John 2:14  which reads:

“I write to you, young men, because you are strong and vigorous, and the Word of God is abiding in you (in your hearts), and you have been victorious over the wicked one.“

This formed the basis on a discussion about the creation of the universe which God brought into existence from nothing through His spoken command. Through His Word, God brought the entire creation into being and presently He sustains everything through the Word as well. Jesus is the incarnate Word of God and He has come to dwell in their spirits through the regenerating power of the Holy Spirit. However, in their minds, there is still a large deposit made by the world that they received through their senses. The written Word is given so that by studying it, meditating on it, turning it over in our minds, and repeating it out loud, our minds can be re-programmed and renewed. Once we start speaking out this revelation knowledge more dynamics take place and so we grow in the power of the Word. I also referred them to Revelations 12: 11 which reads:

“And they have overcome (conquered) him by means of the blood of the Lamb and by the utterance of their testimony, for they did not love and cling to life even when faced with death.”

FROM DOG BOX TO GOD BOX

This dying to self in order to testify to Jesus is something the Holy Spirit will always empower you to do because that is at the heart of obeying Jesus. His last command to the disciples assembled for the ascension back to His Father was to tell them to go and wait for the coming of the promise of the Holy Spirit who will empower them to testify to the life and death and resurrection of Jesus. The test comes as it did with Peter when one is in a company of people and you choose not to testify of to say something negative because you do not want to be left out or feel embarrassed. Obviously, they failed the test and now had to deal with the consequences. However, God turns all bad things in our favour if we choose to repent and then do the right thing. Therefore they could either be in the Dog Box and continue along the wrong lines, or they could easily find themselves in the God Box if they decided to get their tongues under the control of the Holy Spirit by surrendering their past to God as well as all their future conversations. They could also sit there and mope because they were in isolation and could not take part in normal activities, or they could redeem the time by getting into some serious Bible study and prayer time.

TRANSFORMED BY THE WORD

I must admit that I was amazed at what change took place in their lives after I returned the following week. These guys had gone through a literal transformation and each time I see them now, the growth is visible. It just goes to show how important our speech is before God and why the Word says that every single word we speak will be accounted for.