JESUS MAKES A MOVE IN THE USA

During the late sixties, a strange revolution was taking place among the youth in the USA. They completely broke loose out of the conservative mould of the fifties in terms of dress code, dialogue, societal behaviour, music and arts preference and way of thinking. They smoked pot, tripped out on LSD and dropped out of the established norms of mainstream America. They burnt their country’s flag and refused army conscription to the point where they started rioting in front of State buildings in protest against the Vietnam war. They were breaking out of Uncle Sam’s Program for a well-behaved middle-class society. Then the hippie movement started turning sour due to indulgence in sex, drugs and occultism. Many were dying from drug OD’s, others went psycho and the dream of freedom had turned into a nightmare of bondage for many. And then a strange thing happened….. Jesus made a move …..in their direction.

Titus 3:5: Not by works of righteousness which we have done, but according to his mercy he saved us, by the washing of regeneration, and renewing of the Holy Ghost

Titus 3:6:  Which he shed on us abundantly through Jesus Christ our Saviour 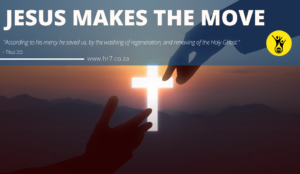 THE JESUS MOVEMENT IS UPON US

It began with an encounter, the experience of faith in Jesus Christ among the hippies. Beginning in 1967 many of those formerly involved in the counterculture began to proclaim that their lives had undergone a radical spiritual transformation. Addicts spoke of freedom from drugs, wide-eyed teenagers recounted dramatic healings and miracles, while others joined in choruses of ecstatic utterances wherever two or three devotees were gathered together. Testimony services revealed that something extraordinary was happening. Common to all of these incidents was a fanatic-like allegiance to the person of Jesus Christ. This wave of spiritual enthusiasm ushered in a grassroots spiritual movement whose street-level participants found an affinity with the testimony of the early Christian believers. For most of these street Christians, it was as if they too had somehow entered the biblical narrative and found themselves walking through similar events as those outlined in the Book of Acts. In an article in Look magazine in 1971 the headline proclaimed what many already knew – “The Jesus Movement is Upon Us.”

Here in South Africa a similar thing happened in Cape Town where there were also a number of hippie communes. I was one of the hippie leaders and totally spaced out on acid, astral trips  and spiritual encounters. After a very bad experience with my spirit guides when they showed their true demonic nature, I knew my life was in danger and I wanted out. I still had enough sense to know that humanly speaking I was beyond all help. Some of my friends had died, others were locked up in jail and somewhere whacked out on psychiatric drugs in mental institutions.

While smoking pot on my own one night in a secluded part of a public park, Jesus Christ spoke to me in an audible voice. I strongly sensed the presence of some or other invisible being at first and as this “vibe” got stronger I thought a demon entity was about to manifest. After it got unbearably intense I spoke out loud requesting this entity to show itself and after the second half-hearted request, a clear strong voice spoke to me. He told me to go and find a little pocket Bible in a wardrobe in the room I was renting. In it I would know his identity. On finding and opening the little forgotten Bible my eyes immediately fell upon the crucifixion of Jesus. I knew through a revelation that came to me in a flash that Jesus not only died for my sins but that He truly was alive and interested in me as a person, despite my Satanism and the other terrible things I had done. That night I knelt in that room all by myself, said a simple prayer asking for forgiveness and was saved. A miracle took place as I got up off my knees only moments later. In a flash, I was sober and delivered from demon possession.

The following night I related this experience to a large gathering of my friends of whom many got saved as well in the weeks to follow. Several hippie communes became cell groups of Jesus Freaks and soon we took to the streets sharing our newfound faith and deliverance to all we came across. The same Spirit which fell upon hippies in the States fell upon us in Cape Town. Years later I met Lonnie Frisbee who was instrumental in leading thousands to Christ in California and we compared notes. It was the same Jesus and the same Spirit and our lives were almost in parallel. Sadly he relapsed years later and died of AIDS.

THE INVISIBLE CHURCH IS BORN

Out of this movement in South Africa, the Invisible Church was birthed. The number of addicts, prostitutes and other lost street people who were changed by the power of the Holy Spirit as we followed after Jesus as our role model, was mind-boggling. People who had been written off by society and the “professionals” made 180-degree turnabouts. The Invisible Church was greatly blessed and grew at a phenomenal rate to eventually spread abroad as far as London.

It was eventually disbanded when it seemed as if we would become another denomination, which was contrary to the original vision. One thing remained in my heart, the reality of change that takes place when people become Jesus-followers. When years later, when I was thoroughly disillusioned with Christianity as projected and lived by most mainstream Reformed, Pentecostal and even Charismatic churches, the memories of those days in which we re-lived the book of Acts so to speak, kept a small flame alive in my heart. After my spell in jail in 1984, I knew that somehow God would rekindle the fire which once burnt so fiercely within me. And He has, praise God!