YOU ARE COMPLETE IN HIM

We know a lot about most of the criminal thinking errors so familiar to people addicted to street or illicit drugs. But how about the lies that people believe who have become legalized addicts. We have one lady in our fellowship who used to abuse illicit street drugs some 35 years ago as a young girl. She has been in countless rehabilitation centres as well as a number of psychiatric institutions. She was diagnosed as a paranoid schizophrenic at one stage and has been led to believe that she is a bipolar sufferer in recent years. She was also on medication for blood pressure, anxiety attacks and a chain-smoker when first introduced to our fellowship. She had resigned herself that she would never become drug-free because of the disorders she suffered from. She also suffered from a severe case of worthlessness and apathetic tiredness. Whenever she spoke her sentences would come out in a short burst of almost incomprehensible muttering of self-condemnation. After about eight months of informal counselling and encouragement to start testifying as to the small victories in her life, she started overcoming most of the underlying lies that kept her mind in confusion and turmoil. 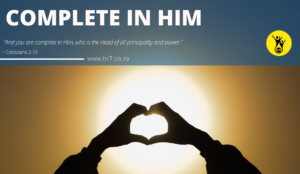 OF HELP AND WORTH TO OTHERS

The most incredible breakthrough came when she realized how much God loves her and that she can be of help and worth to others. As she started testifying to the Lord’s grace in her life one could literally see the growth in her from week to week. Then one day she announced that she was going to stop smoking which she did. This woman who could hardly speak to other people on a one to one basis went on the air one day and gave advice and testimony to over a 2.5million listeners. Sure she still has her moments of doubt and depression, but she is no longer a prisoner of the lies that kept her from changing. Most of those lies were picked up from irresponsible professionals with an impaired vision of the reality of God and the power of His Word.

I was once invited to address a high school in the Northwest province where three teenage suicides in short succession rocked the small town in an affluent farming community. A minister from the Reformed tradition had invited me there and I was given almost one and a half hours to address the students after which time I put out a strong appeal to repent from all sinful behaviour and turn to Jesus Christ as Savior. More than 800 young people responded positively. That morning I shared the stage with some five other ministers from various church denominations. They were visibly shaken by the positive response of the students and promised to get involved in the follow-up.

THE BIBLE PROVIDES MORE THAN ENOUGH

Afterwards, we were having tea in the local minister’s study and he confessed guilt at not being able to prevent the suicides due to a lack of knowledge on counselling drug and depression-related issues. I asked him if he had any training in psychology whilst studying in Seminary to which he replied in the negative. He did receive some training in the counselling methods of Dr Jay Adams and had several of his handbooks, which he added he did not handle since he left University. So feeling ill-equipped to deal with the apparent psychological problems of these young boys he referred them to a pastoral psychologist in a nearby town and lost track of their situation. Two of the boys had family members in his congregation and so he presided at their funerals. Without heaping further condemnation on his head I asked him why he did not at least consult the handbooks he had, which would have given him more than enough guidance from the Bible on how to handle the fears and anxiety these boys were faced with.

THE TEXTBOOK ON HUMAN BEHAVIOUR

No matter how much we theorize about counselling methods, the Word of God is more than sufficient to act as the Textbook on human behaviour from God’s perspective. We cannot fall for the lies with which Satan wants to rob the Church of her God-given authority. When Jesus stated that all the authority God gave Him he has passed unto us we must believe that. Matthew 10:1 says:

“And when He had called to Him His twelve disciples, He gave them authority over unclean spirits, to cast them out, and to heal all kinds of sickness and all kinds of disease.”

The word heal in this context is therapeuō in the Greek original text. Belief therapy is all about exposing lies and replacing them with the Truth of the Word. Many people are sick and disease-ridden today because of the poisonous chemicals they are being fed in the name of secular therapy.

POWER OVER THE DEVIL

We have power over all the lies and strategies of the Devil and need not take second place to any other man-made theory or philosophy when it comes to dealing with any issue a congregation member or counselee may have. What is necessary though is that we are adequately trained in the Truth in order to identify lying spirits, mental strongholds and vain imaginations. When Christ sends us out to proclaim the Gospel and heal the sick it includes physical, mental, emotional and spiritual sickness. I mean where did Paul and Timothy and all the other Apostles get their training other than from the guidance of the Holy Spirit through Scripture.

When studying the root of the psychological tree of knowledge I was not surprised to find that both Jung and Freud had abused cocaine, suffered from many mental disorders and were both deeply involved in the occult. This information can be researched and traced on several websites and is present in much of their own writing. In one of his books titled “Psychology and the Occult”, Carl Jung states that the science of psychology is founded on the occult. In other writings, he confirmed that much of his theories were channelled to him by a spirit being called “Philemon”. In my simplistic mind this puts this wonderful science of the mind in the same context as the following Scriptures:

1 Timothy 4:1: “But the Spirit explicitly says that in later times some will fall away from the faith, paying attention to deceitful spirits and doctrines of demons.”

Colossians 2:9: “For in Him dwells all the fullness of the Godhead bodily.“

Colossians 2:10: “And you are complete in Him, who is the Head of all principality and power.”

Colossians 2:12: ”Buried with Him in baptism, in whom also you were raised through the faith of the working of God, raising Him from the dead.”

I am not implying that all psychology is demonic or that people trained in it are demon-possessed and evil. What I am saying is that it is highly overrated and definitely not a science. It does however perpetrate many lies about man, his personality and his inherent goodness. No man can change another, much less change himself from becoming sinful.