THE POWER OF THE CROSS OF CHRIST

“Likewise count yourselves also to be truly dead to sin, but alive to God through Jesus Christ our Lord.”

“ If I dragged a dead corpse into my study and propped it up in a chair facing you, would you offer it a cigarette or a line of coke”? I often confront counselees with this ludicrous scenario and the answer is pretty obvious. There is no hope that the dead person could partake of whatever is being offered. When the counselee is totally convinced that a dead corpse cannot use drugs anymore, I turn them to Romans 5-8 and pick a few verses to discuss. Obviously by this time we have dealt with the issue of the sinfulness of drugging and how that it is an offence to God, society at large and a grave sin committed against their own families and their personal health. It has however been anticipated by God as He clearly outlines the reality of drugging in our day and age. Apart from warning us about it, describing in graphic detail its global impact as recorded in Revelations 18, God has also made full provision for the forgiveness of those who have committed this heinous sin. 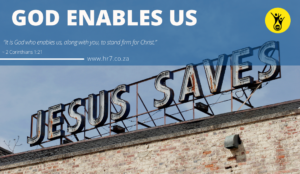 THERE IS HOPE OF FULL RECOVERY

God would not do this if there was no hope of a full recovery from its awful effects. As much as Jesus could raise Lazarus from a putrid stinking dead corpse to new life, just as much can God give new life to a heroin infected living zombie. All that is required is the faith of a mustard seed and the decision to repent. Now the word repent is something we spend a little bit of time on in the first counselling session. The Greek word is metanoia which basically means to thoroughly consider and think and meditate on a situation and after looking at all the facts to make a wilful decision to turn around and go in the opposite direction from the original course of action.

WHEN WE TURN TO GOD, HE ENABLES US

It is at this point where one comes in direct confrontation with the human viewpoint promoted by secular therapists. They maintain that the addict cannot help himself and they are right in a sense. They cannot change their ways or stop using drugs on their own and we agree on this point. But what the humanists cannot or will not admit is that there is a God who can enable us, provided we turn to Him. It is this turning point which He is looking out for to see in us.  The call to repentance is the injunction by God for sinners to reconsider, think upon, intelligently use their minds and their will to turn from the world’s point of view, which either condones dysfunctional behavior or repudiates sin. It condones dysfunctional because every other factor is called upon to justify the addicts behavior instead of bringing godly accountability to bear upon his/her way of thinking and subsequent behavior.

SIN IS TOO CONFRONTATIONAL?

Professionals look upon Biblical counsellors with scorn because of the sin issue. How can we be either so cruel or naïve to believe that confession of sin will bring about deliverance from such a terrible incurable disease? We are cruel when we confront the addict with his/her utter selfish behavior when they are victims either of rejection, their environment which is either the slums, or privileged  middleclass or affluently rich. It we are not blaming these then it is peer pressure, or a poor self-image or a genetic disposition. To call it sin is just too confrontational and inhuman.

However sin’s penalty has been paid for in full! That means there is a way out! It sounds too simplistic and too good to be true but it requires repentance and faith. It requires trust and humility and it requires death. It requires identifying with Christ on the cross. It requires a 100% acceptance of the Divine point of view, there is no room for man-made philosophy or theory or self-justification. It is not an acknowledgement of some higher power and living a 12-step program one day at a time. It requires just one step towards the cross in faith in the living God who is called I AM and who took on flesh and whose name on earth is Jesus Christ. Trusting and believing and obeying what this living God requires, is our only hope, but it is a sure hope because Christ rose from the grave and is living today in the flesh and He is seated at the right hand of God the Father and He is the only judge to whom we are accountable, and He declares us guiltless when we put our faith and trust in Him. No professor of philosophy or human science could think this one out. It has been declared by God in the Garden when Adam lost it and it reverberated through all the preceding ages through the prophets and God’s appointed messengers until it found fulfilment when at the appointed time, Jesus cried out on the cross:

“Father forgive them, they don’t know what they are doing”!

JESUS PAID FOR OUR SINS IN FULL

This divine set up, ordained and planned to the finest detail, taking every sinful action, thought and reaction of every sinner fully into account, is the source of our hope. No matter how depraved and destructive we have become, no matter how many people we deceived and defrauded, no matter how low we have sunk into the gutters of city, Jesus paid in full. He became sin to the uttermost on our behalf and in Him God forgave us fully. Not because God was forced into it by His scheming adversary, the Devil, but because His own holy Law demanded it. And the worse our sin, so much greater God’s undeserved  and unmerited favour towards us in Christ. The greater the depravity of the addiction the greater the measure of God’s grace and mercy.