ILLUMINATE IN THE LORD

The human viewpoint is man-centred. It is all about man’s needs which happens to be the focus of most of the constitutions in the free democratic West. Most of it sounds good and right because it is the champion of human rights and is very agreeable to most people. It is also very dangerous because it relegates religion to a less important position than man’s other basic needs. Freedom of religious expression is fair but it also effectively took Christ out of the top position He enjoyed when young nations were founded by deeply faithful God-fearing Christians. In those early days, members of Parliament consulted the “Book” which was prominently displayed during sessions of debate. Today diviners, Shamans, New Age witches, Luciferians, Free Masons and members of strange and Mysterious Occult orders are entrenched in seats of global power.  Since God has been de-throned in the affairs of the World morals have plummeted, respect for law and order ignored, obedience to parents eroded, the rights of criminals enhanced to the detriment of law-abiding citizens, and crime has become rampant. Secular humanism has become the religion of post-modern man and TV icons of pop psychology the new high priests of the masses. Sin has become various syndromes. These are emotional and psychological disorders that are caused by everything else except the sufferer’s own deviant thinking and behaviour. 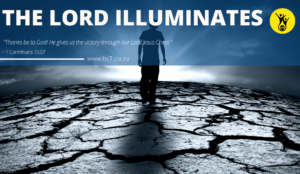 The human viewpoint does not include accountability, it protects the rights of the sinner at all costs. These disorders are described in terms that only professionals can truly understand and interpret. They have become diseases of the mind and psyche that must be treated to alleviate the pain and discomfort of the sufferer. When none of the prescriptions seem to work, the condition is declared terminal and some mysterious unknown incident deeply buried in the subconsciousness is given the blame. Eventually, the poor victim is put under the power of a hypnotist who hopefully will be able to bring the tormentor to the surface. When all this fails and all hope is gone the poor soul might land up as a permanent inmate is some obscure ward locked up as a raving lunatic or a shuffling catatonic, who is kept in a chemical straight jacket the rest of its days. All semblance of the image of God totally destroyed. Nothing but a living dead. Or suicide will claim this poor demented soul and he/she will become part of the statistics.

THE WORD OF GOD WILL ILLUMINATE

Hopefully the message of God’s way, the Divine viewpoint, will become so strong that the Light of the Word of God will illuminate the dark corridors of humanity and people will know where to come for help. Hopefully, Biblical counselling will be given its rightful place in Universities where the faculties of the Social and Human sciences are taught and the Bible will become the number one textbook on human behaviour. Hopefully, students of humanity will come to realize that in order to understand the mind of man we need to study how God sees us. After all He designed our minds did He not? Or are we so puffed up with knowledge and theories of our own making that we are not prepared to learn from Someone whose intelligence we cannot begin to grasp.

JESUS IS THE ONLY WAY

As an addict in my early days, when I had hit the wall of no reason, when I was totally at a loss as to how I could rid myself of the demons that had taken possession of my body soul and mind, I knew that medical science had no answers. I also knew that there was no textbook in psychology that could even vaguely describe the hell I was in. Instinctively I knew that no scholar or disciple of Carl Jung or Sigmund Freud could cure my ills. Both those men died without answers to their own disorders and both were heavy abusers of cocaine. Maybe they did possess brilliant minds at some stage, but so did the Huxley’s and Timothy Leary and Aleister Crowley but how did they end? They remained lost within the woods of their own reasoning because they refused to look up into the face of the God who made them. They clung to the lie of the serpent… ”and you shall become like God” and perished. I thank God I have come to understand that there is only One WAY and that it is in Christ Jesus, THE WAY. He is the Divine Compass who came to show us all about sin and disease, and deception and how to overcome it, and how to live and how to die so that we may find our way back to our eternal home in Heaven.

JESUS WILL OVERCOME ANYTHING

Every single addict that passes my way for help or advice or counselling gets confronted in love with the Gospel of Jesus Christ. They hear clearly from day one that there is only one textbook we will work out of during each and every session in counselling namely the Word of God. It is all-sufficient, all-powerful, all everything else we need, to come to terms with our own sinful nature, which according to the record kept by Almighty God has been totally and completely destroyed in the sacrificial death of Jesus Christ. Whatever psychological profile or mental disorder or psychiatric syndrome has been written over their life and been blamed for their dysfunctional life, God will address it from the Bible and in Christ Jesus, it can be overcome. This is the hope we hold forth, that in Christ Jesus we are more than conquerors. 1 Corinthians 15:57  But thanks be to God who gives us the victory through our Lord Jesus Christ. This is the Divine viewpoint, the way of the regenerating power of God in the Holy Spirit, but it still remains a choice. The same as it was a choice to take that first pull on a joint or snort that first line. The choice to believe; either the human viewpoint or the Divine viewpoint was given in the Garden, and it still stands. Who are we going to believe? Are we going after the human-centred viewpoint that is constantly making excuses and justifying the use of substances forbidden by God? Are we going to continue sympathizing with people who prefer to obey the craving of their sinful human nature? Or are we in love going to point them to a Saviour who knows their shortcomings and who paid for their sin in full? Hebrews 4:15  For we do not have a high priest who cannot be touched with the feelings of our infirmities but was in all points tempted just as we are, yet without sin. Are we going to run to proponents of human philosophies and theories, who test their latest pills on unsuspecting guilt-ridden and fear-driven sinners, or are we going to confront them with the liberating truth of their Creator-God?

WHY A LAST RESORT?

It really freaks me out totally when people turn to Biblical counsellors and Belief Therapists as a last resort., Initially, they were referred to the “professionals” by their minister or pastor who told them that drug addiction or the depression that is the result of addiction, is not in his field of ministry because it is a mental, medical or psychological disorder, for which the Bible has no direct answers.

It is quite amazing how few people know about the fact that God has very clear instructions and teaching in the Bible on the matter of drugs. When I was off the juice and only used pot and other drugs in the beginning of my drugging days, I would readily point out that God does not want us to get drunk. As hippies, we looked down with scorn upon the winos and juice-heads at socials where we happened to find ourselves.  The Bible very clearly addresses the abuse of drugs, especially in our modern age and what is more, He gives very clear instruction on how to break free and stay free.