GOD AND SIMPLICITY GUIDE US THROUGH LIFE

THE GOSPEL IS SIMPLE TO SIMPLE PEOPLE

I recently met a man whose sole mission in life is to seek out untouched Indian tribes in the Amazon jungle and to bring them the view that God the Creator has of them. These are primitive people who have never been affected by our worldview since the fall of Adam. They have never been exposed to anything else but their way of life for thousands of years. Yet they are still seeking to make contact with the Great Spirit in the sky who made everything. They maintain that their forefathers must have done something wrong somewhere because they cannot speak with Him and therefore have to obey the lesser spirits who live with them in the forest. If they do not bring sacrifices these spirits get angry when they disobey their code of living and something bad happens. Their witch doctor then has to use his magic potions to contact these spirits to find out what is wrong so that the tribe can fix it. When he drinks his magic potion he can see and hear the spirits more clearly. These people are overjoyed when they hear that the Great Spirit became a man like us to come and show us what the problem is and how to get to know Him. Although these people have gone so far as to sometimes each the flesh of other humans or to sacrifice their children to the spirits, they have more wisdom in recognizing the simplicity of the Gospel than some of the “great minds” of our modern civilization who try to convince us there is no God. 1 Corinthians  1:27 says: 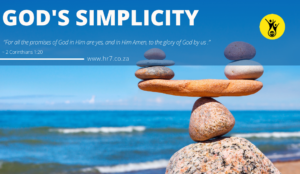 I have had very few interviews with drug-addicted people who have not had some kind of God-experience whilst on drugs. On the other hand, every single drug addict has admitted their “lost-ness” when it came to discussing their relationship with God. Most of them suffer from intense confusion as to how to relate to Him. People on drugs are experiencing deep emotions of having lost their way in life by the time they are ready to accept help. In counselling them we need to take them to higher ground so that they can get a better view of where they are finding themselves in relation to their immediate surroundings. When one is hunting in the African bush veld on a cloudy day and the terrain is flat with no high visual points of reference such as the sun or mountains you can easily get lost if you do not keep track of the changing scenery. You have to keep your wits about you when you are not an experienced tracker. And if there are no high trees to climb to find a point of reference you can go around in circles and perish if some search party does not come and find you. So is it when one is on drugs and your point of view is based on your own human reasoning and you are not prepared to seek higher help. I am afraid most of the counselling industry finds itself in this precarious position at present because they are so focused on the human point of view. They really cannot discern the wood from the trees and are blundering headlong into a tangle of confusion.

In our counselling practice where we only make appointments with people who are in dire straits for having been almost everywhere in order to find help for themselves or relatives and friends caught in the awful web addiction, we see far too many hurting and disappointed people. Their hopes have been devastated by irresponsible medical practitioners and other “professionals” who have labelled them with all sorts of terminal disorders and syndromes. Most of these diagnoses are totally unfounded, have not been properly assessed even against the latest edition of the bible of psychology and psychiatry, the DSM IV TR, (Diagnostical Statistical Manual) or have been properly explained to the counselees. Surely if these people want to give direction to others from a human viewpoint, they need to have some basic instrumentation against which they can make proper assessments.

YOU DON’T NEED TO GO AROUND IN CIRCLES

To my knowledge, the only standard they could use which would contain most of the criteria involved in human behaviour dynamics is the DSM IV TR. Having said that though, I must state bluntly that measured against parameters used in proper scientific measurement and control it does not comply. There are just too many variables that overlap and contradict. We do not have the space to go into all the ramifications and that is not the purpose of this discourse. What we are stating is that if these professionals want to use the categories of dysfunctional behaviour contained in the DSM they should at least know how to use and apply them properly. It is like trekking through a jungle with a faulty compass, at least you know you are moving into a general direction. You might not reach your exact destination but at least you will stop going around in circles.

AN IMMUTABLE STANDARD FOR BEHAVIOUR

On the other hand, if I had a GPS in my hands that is coordinated with a satellite that has been scientifically positioned I could not only find my direction but get within one or two meters of my exact intended destination. Should we accept the fact that God positioned the stars in the universe, and set the scientific laws in place, each according to its specific codes and those codes is immutable, otherwise they wouldn’t be based on science but rather speculation, then surely this same God has also given us a code of behaviour. This code of behaviour, in order to be scientific, would have to be measured against an immutable standard in order for it to be scientific, not so? Could we be correct in naming such a code of behaviour, character? I am sure you will agree that is the most appropriate description we could give it in our language. But now whose character would God use and how would He be able to communicate it to us so that we can relate to it on both a human and spiritual level.

A CODE FOR MEASURING OURSELVES

He came to earth, took on flesh demonstrated all of his holy character to us and had it recorded so that there would be an accurate translation for every race to read and understand. So we put it to the reader that the Christian Bible is the accurate scientific  code for human behaviour by which we can measure ourselves. In order for us not to get lost in our translation of this code, God further built into it many checks and balances through which we could correlate it with the times or ages we found ourselves in. These are commonly known as prophecies and promises pertaining to certain future events He would bring about so that we could plot our course accurately through the oceans of time. 2 Corinthians 1:20  says:

“For all the promises of God in Him are yes, and in Him Amen, to the glory of God by us”