High-mindedness is caused by the spirit of haughtiness (Proverbs 16:18). High-Minded is identified in Romans 11:20-21:

“Well; because of unbelief they were broken off, and thou standest by faith. Be not high-minded, but fear. For if God spared not the natural branches, take heed lest he also spare not thee.”

Contrast that statement with 1 Timothy 6:17, which says:

“Charge them that are rich in this world, that they be not high-minded, nor trust in uncertain riches, but in the living God, who giveth us richly all things to enjoy.”

Paul identifies several godless conditions of the last days as people who are traitors, heady, high-minded, lovers of pleasure more than lovers of God – see 2 Timothy 3:4 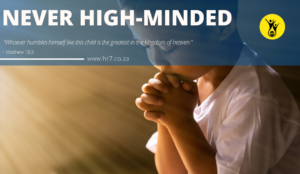 The literal meaning of the word in the New Testament is “to wrap in smoke.” It describes a mind held captive by conceit. It was a mind clouded with the obstruction of self-centeredness.

High-minded means to be arrogant or puffed up, like smoke. Symptoms are: overbearing – pompous – proud – domineering.

The Old Testament judge, Samson, stands as an example of someone who was high-minded. Samson judged Israel for 20 years. Supernaturally endowed, he killed a lion, thirty Philistines, and one thousand men. He broke the strongest bands, carried off the gates of Gaza, and pulled down the Temple of Dagon (Judges 13:24-16:30).

As long as Samson remained a Nazarite, he was unconquerable. He only, of all the judges of whom we have history, performed his feats singlehandedly. Samson never called the armies of Israel together, and he never asked for assistance.

His complex life teaches us the evils of mixed marriages (Judges 14:3), the laxity of sexual relationships, and of playing with temptation. Samson is a classic example of the impotence of mind because of high-mindedness. The deadly results of his compulsive actions after he broke his Nazarite vow are chronicled in dark and ominous order:

Samson stands out as a man of striking contrast. He had a Dr. Jekyll and Mr. Hyde personality.

A high-minded person would be a prime candidate for sex addiction, drug addiction, a compulsive organizer, and a fanatic on structure.