In the Sermon on the Mount, Jesus established the Biblical Therapy process of exposing and correcting lies. He exposed a whole series of religious lies in the Gospel of Matthew 5 by using the phrase

In Chapter 6 of Matthew, Jesus continues the process: 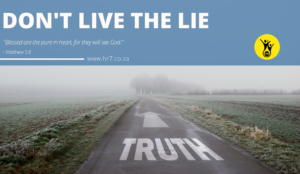 There are eleven lies and/or half-truths in these two groups alone. They reflect a mind-set or mind condition of the most religious people of Jesus’ day. What they believed caused them to think, feel, and act in ungodly ways. People can believe wrongly about right things and be wrong. Fasting, forgiveness, prayer, giving, and love are all good. However, if what you believe about them is wrong, you are wrong no matter how religious you are. It is amazing how much we can believe without believing enough.

LIES AS STRONG AS THE TRUTH

Illustrations of this fact are fresh in our memory with David Koresh, Jim Jones, and the Heaven’s Gate cult. Though they are examples of the extremes in believing religious lies, they are indeed modern classic cases. Lies are as strong as the truth if a person believes them. Religious lies are the most commonly acceptable.

A LIE RUNS AROUND THE WORLD

“A lie runs around the world, while truth is putting on her boots.”

He was right. Fallen human nature wants to believe lies, especially “religious lies,” which makes it easy for the lies to take root. Of all demagogues’ activity, the religious ones who promote religious lies are the most despicable. They know how to bait the hook.

WE ARE WHAT WE BELIEVE

What we believe determines how we behave, and both determine what we become. If we believe the truth, the truth will satisfy us (John 17:17) and make us free (John 8:31-32). If we believe lies, we will gradually become a lie as we lose our integrity and begin to practice duplicity. It is fundamentally true that we become like the god we worship. If that god is false, we become false. In Psalm 115:8

“Those who make them false gods are like them. So is everyone who trusts in them”