NO TRUTH IN SATAN

Not every thought we have is true, though it may feel true. The problem with believing a lie is it may as well be the truth because the consequences are the same. If you believe you are shameful because you were sexually violated as a child, it does not matter that you were innocent. The shaming lie will work itself out in your life as though it were true. The consequence will be the same. 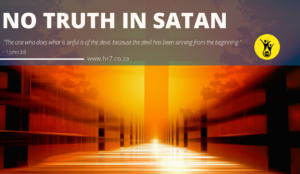 CHALLENGING THE LIES – RENEWING THE MIND

When the belief system is seeded with lies, the individual’s beliefs will cause continual life-controlling problems. Modern research has proven that the lies children learn through television, cartoons, peers, and the aberrant behavior of their oikeios (oy-ki’-os, the household), will influence them for the rest of their lives. Some children enter their teens with some seriously unhealthy mind-sets, i.e., lies, strongholds. In Biblical Therapy, these lies are challenged, exposed, and replaced with the truth. The Bible calls the process the renewing of the mind (Romans 12:1-2).

In John 8:44-45, Jesus introduced us to a revelational truth that set the stage for the lie-versus-truth system. He said:

“You are of your father the devil, and the desires of your father you want to do. He was a murderer from the beginning, and does not stand in the truth, because there is no truth in him. When he speaks a lie, he speaks from his own resources, for he is a liar and the father of it. But because I tell the truth, you do not believe Me.”

THERE IS NO TRUTH IN SATAN

Observe the identification of “lie” and “truth” in the passages. Satan is identified as a liar. There is no truth in him. Therefore, as we shall see in a moment, the lie has been his most effective weapon against man. He used it in the very beginning. Because it worked on the first Adam, Satan thought it would work on the Second Adam, Jesus. (See Matthew 4.) It did not work!

SATAN IN THE GARDEN OF EDEN

The “lie method” for controlling who people are and what they become was established in the Garden of Eden. Satan started it by refuting God’s commandment and statement as quoted in Genesis 2:17.

“But of the tree of the knowledge of good and evil, thou shalt not eat of it; for in the day thou eatest thereof thou shalt surely die.”

That was the truth. The problem arose when Eve believed Satan’s lie. Satan told Eve in Genesis 3:4-5:

“Ye shall not surely die. For God doth know that in the day ye eat thereof, then your eyes shall be opened, and ye shall be as gods, knowing good and evil.”

That was a lie.

In Genesis 3:6 we have the first, as Biblical Therapy interprets it, Source of Destructive Consequent Behaviour. Eve believed that the lie was the truth. She saw it (the forbidden fruit) was “good for food.” The lie produced a thinking error: that it was “pleasant to the eye.” The thinking error produced a darkened emotion: “a tree desirable.” Finally, her darkened emotion produced godless behaviour.

SATAN HAS NOTHING NEW

Moving along further into the Old Testament, we see the same pattern in Amos 2:4:

“Thus says the Lord: ‘For three transgressions of Judah, and for four, I will not turn away its punishment, because they have despised the law of the Lord, and have not kept His commandments. Their lies lead them astray, lies which their fathers followed.”

The error which kept throwing Israel into the sin-cycle was believing the lies. The lies, if you will, they had learned from their fathers. Why not? The lie worked in the Garden, so why should it not have continued to work? It did and it does. The pattern has not changed since the Garden of Eden. The source of life-controlling problems from the beginning has been, believing the lies. Satan has nothing new.