HIS WORD IS TRUTH

A HANDBOOK FOR HUMANITY

What you will find from time to time are references to research and findings by noted psychologists that correlate greatly with the same truths we find in the Bible. It is not that we are trying to validate what God says to be true by quoting them, it is just that we want to understand that God has given us a handbook on humanity that covers every single aspect of our spiritual, psychological and practical living experience. 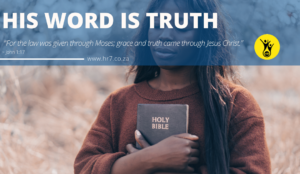 GOD IS THE TRUTH

From our studies so far we can come to no other conclusion but that God is the ultimate and supreme psychologist we can get counselling from. There is however one great and unchangeable fact, God does not theorize, He states immutable and undisputable truth because He is Truth. Furthermore, if we follow and obey His counsel the outcome is guaranteed. He also provides an unchanging standard by which we can measure our functionality and clarity of mind. This has been the anomaly that could never be resolved among secular psychologists and theorists namely where to find the perfect man against which we can be measured. We all have our shortcomings, failings and weaknesses when we are truthful. Jesus Christ was the only one ever in whom no sin or wrongdoing or lies could be found. Consequently, He is the one against whom all of us are measured. In Romans 3:23:

THE WORD OF GOD VERSUS OUR BELIEF SYSTEM

Biblical Therapy is a faith-based process during which we compare the lies that have formed our belief system with the truth according to God’s Word. According to the Bible, we discover that the embodiment of God’s Word is His Son, Jesus Christ. In John1:1-2:

THE CREATIVE FORCE OF THE WORD OF GOD

We also learn from Genesis which reveals to us the creative process through which God brought the physical creation into being that He spoke it all into existence. So through His Word, the heavens and the Earth was produced which denotes the creative force of God’s Word. Furthermore, He keeps it all in perfect balance, sustains it and grows it through His Word.

A TWOFOLD LIFE IN THE SCRIPTURES

The life referred to in this Scripture is twofold, it is life as in life and death but it is also life that brings light as in spiritual awakening. Darkness is the absence of light as lies are the absence of truth. Every day we have the day and night to remind us of this reality, namely that God made a difference between light and darkness through His Word. He also sustains this system through His Word. His Word is the exact expression of Himself because God cannot speak a lie due to His holy and righteous nature. In order to make himself plainly visible to us, He took on human flesh and came to earth according to the prophecies He gave through His servants the prophets over many thousands of years. According to Hebrews 1:1-3:

God, who at many times and in many ways spoke in time past to the fathers by the prophets, has in these last days spoken to us by His Son, whom He has appointed heir of all things, by whom also He made the worlds. Who being the shining splendour of His glory, and the express image of His essence, and upholding all things by the word of His power, through Himself cleansing of our sins, He sat down on the right of the Majesty on high.