THE BIBLE AND BELIEF SYSTEMS

Though Biblical Therapy’s primary counselling focus is on a person’s belief system, i.e. discovering the lies that influence thought, emotion, and action, gaining an understanding of the spiritual condition of the mind is extremely important. The mind of man can be either spiritually healthy or unhealthy. In addressing human addictions, the spiritual state of one’s mind has a strong bearing on the type of addiction to which one could be vulnerable. 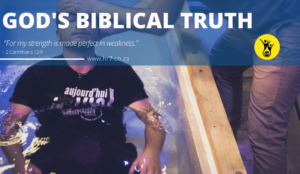 An intoxicated mind, for example, makes one vulnerable to behaviour which he would not normally express. That, of course, is a shallow illustration of what I am calling a “condition or state of the mind.” A person’s spiritual state of mind, however, does have the same possibility of vulnerability. What I am talking about is the mindset or mind-condition.

WHAT SPIRITUAL FORCES ARE BEHIND AN ADDICTION?

Whereas traditional models deal with addictive behaviour on an intellectual and emotional level, in Biblical Therapy, we deal with the spiritual dynamics of behaviour. We seek to discover, for example, what spiritual forces are behind an addiction.

Traditional models explain how people develop belief systems over a long period that they will either adopt intellectually or accept on the emotional (feelings) level. For example, with personalization, a wife may feel that because her husband leaves his dirty clothes on the floor rather than in the clothes hamper, it is an intentional, personal attack on her. With generalization, a teacher may generalize from a few disruptive actions of a student that the child will grow up to be a criminal. With polarization, issues are always seen as black and white. With selective abstraction, a person may focus on the five points he missed on a test, rather than the ninety-five correct answers. With magnification, a husband or wife may view a rather normal marital conflict as disastrous. With arbitrary inference, a person at a social gathering may assume that the people in a group across the room are talking about him.

These beliefs, whether stemming from the truth or lies, affect our present-day lives and are often responsible for most of our anxieties and insecurities. These are the beliefs that form the state of our minds. The traditional models for this approach are labelled cognitive therapy and rational emotive therapy.

The elements of these two well-established models are where Biblical Therapy picks up what we call the spiritual dynamics of addictive behaviour. Lies that are part of a person’s belief system will produce a multitude of problems. These lies must be replaced with God’s biblical truth for the person to be rescued from darkened emotions and destructive behaviour. Thoughts are like seeds that produce fruit (action, behaviour). The spiritual condition of the mind determines how fertile the soil is for seed planting.

THE BIBLE HOLDS ALL TRUTH

When the state or condition of the mind resembles those discussed below, we have a problem. Religious lies are the most insidious. For example, the one religious lie I have heard most often is: “God can never forgive me for my past sins.”

“If we confess our sins, He is faithful and just to forgive our sins and to cleanse us from all unrighteousness.”

“As far as the east is from the west, so far hath he removed our transgressions from us. Like as a father pities his children, so the Lord pities them that fear Him. For he knoweth our frame; He remembereth that we are dust.”

As a pastor and biblical therapist, I have heard: “God cannot use me because I

“For my strength is made perfect in weakness.”