THE ESSENCE OF REGENERATION

It has been many years that we have been researching, studying and applying certain programs in an attempt to help people through their life-controlling destructive habits. The quest for truth started personally for me in 1987 when I opened the first inner-city anti-drug disco for teenagers which we called Club Regeneration. The name was strange at the time and it came through much prayer. It meant to convey the message that, God was relating to this generation through a desire to make them new. 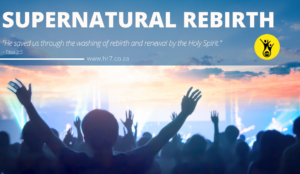 Later on, I discovered that this word was used in some places in the Bible and it often also appeared in theological books that taught the process one goes through from salvation to glorification. Regeneration is the supernatural rebirth of a person when they pronounce faith in the sacrifice of Jesus Christ for their sins. When you are reborn you are regenerated. As it says in Titus 3:4-7:

But when the kindness and love of God our Saviour toward man appeared, not by works of righteousness which we have done, but according to His mercy He saved us, through the washing of regeneration and renewal of the Holy Spirit, whom He poured out on us abundantly through Jesus Christ that being justified by His grace, we should become heirs according to the hope of eternal life.

Blessed be the God and Father of our Lord Jesus Christ, who according to His great mercy has regenerated us again to a living hope through the resurrection of Jesus Christ from the dead

At that time drug abuse and the addictions that come with it was still the exception to the norm. Our focus was more on prevention so we spent a lot of time talking to teenagers at the club, at their schools and wherever they socialized. We had a lot of awareness projects running in shopping centres where we educated the public and parents on what to do to prevent drug abuse among their kids.

As time went by we had to deal more and more with counselling families where one or even more of the teens started experimenting. This was normally discovered by their parents because of dysfunctional behaviour at school or home. This behaviour manifested in the form of truancy, aggression towards family members, petty theft, lying and manipulation and in extreme cases clashes with the law and running away from home. In some cases, there was also involvements with self-styled Satanism and other forms of witchcraft.

Due to exposure through the media through talks on the radio as well as TV interviews I became sought after in terms of counselling families with the above-mentioned issues. I counselled as best I could use my own previous involvement with drugs and Satanism as reference but I soon realized that more specialized training was needed to deal with these very complex issues.

Every possible avenue of theological and Christian based counselling training was researched here in South Africa but I just could not find anything that was purely Biblical based and addiction-related. The secular models proved to be very ineffective with a success rate of 5% and less. Attempts were made to associate with an organization in the USA called Teen Challenge with a proven success rate of 67% and more but it just did not come together.

With the advent of broadband Internet, I could spend some time in cyberspace looking for an Online University that could cater for my needs. I came across a few that offered degree courses in Biblical counselling that would address some of the issues we had to deal with. I enrolled in a B. Min degree and later on was allowed to enrol in Therapon University for a PhD in Biblical Counselling with Belief Therapy as a major.

WE DO WHAT WE DO BECAUSE OF WHAT WE BELIEVE

Belief Therapy is the registered brainchild of Dr Paul Carlin who developed and tested the program in prisons in certain States in the USA. The premise of Belief Therapy is that people do what they do because they believe what they believe. In other words, their behaviour is basically determined by their belief systems. In practice, this means that when people believe lies to be the truth, their lives will be dysfunctional. In Belief Therapy the therapist confronts the lies his client believes with the truth in God’s Word. He/she is then challenged to change their mind and their belief system to bring it in line with God’s will. Issues such as doubt, fear, perceived rejection, guilt, anxiety, stress and various forms of depression are dealt with and the healing process is started. Once new Biblically-based thinking patterns are established the person is on the way to a radically new lifestyle. This also correlates with the teaching of many other Bible-based Counselling luminaries such as Dr Jay Adams, Dr Wayne Mack, John C Broger and Adam Pulaski to name a few. It is out of this wide but in-depth pool of resources that we have developed a therapy model which addresses soul, body and spirit. To end for today, take in the words of Proverbs 11:14

Where no wise guidance is, the people fall, but in the multitude of counsellors, there is safety.