The shaken mind is caused by the spirit of heaviness (Isaiah 61:3). This mind-set is mentioned in 2 Thessalonians 2:2, which says:

“That ye be not soon shaken in mind, or be troubled, neither by spirit, nor by word, nor by letter as from us, as that the day of Christ is at hand.” 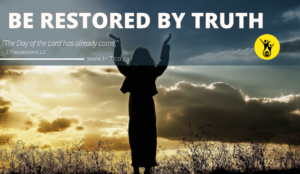 The word shaken describes an agitated mind. It literally describes the action of a stormy wind shaken to make insecure as in Hebrews 12:27, which says:

It means to unsettle from one’s convictions. A number of factors have an easy influence on the shaken mind: trouble, the emotions (spirit), words, and literature. Any one of these factors can act as a trigger that can initiate a downward spiral.

PETER AND THE SHAKEN MIND

NEVER TO DENY THE LORD

Peter became the leader of the apostolic Twelve. He witnessed the raising of Jairus’ daughter, the Transfiguration, and our Lord’s agony in the Garden. Peter became a miracle worker. He swore he would never deny the Lord (Matthew 26:31-35).

However, with all of his good qualities, Peter had a terrible flaw. He miserably failed the Lord in His hour of crisis because he was visibly shaken (Matthew 26:69- 75). His mind was so shaken by Christ’s arrest that three times he openly denied he was one of His disciples. He even accented his denial with profanity.

God used a chicken to pull Peter back together. In his third denial, a cock crowed, just as the Lord had predicted. Matthew 26:75 states:

“And he went out and wept bitterly.”

Peter’s shaken mind was restored. The entrance of truth restored it. After his restoration, he was re-commissioned by the risen Lord.