CAUSES OF THE EARTHLY MIND

The earthly mind is caused by the spirit of fear (2 Timothy 1:7). The referenced passage is Philippians 3:19 which says:

“Whose end is destruction, whose God is their belly, and whose glory is their shame, who mind earthly things.”

The word earthly means “on the earth.” Epi (on) ge (earth) = epigeios (epig’- i-os). It relates to the terrestrial. It is the person who leaves God out of his planning because his focus is on things. 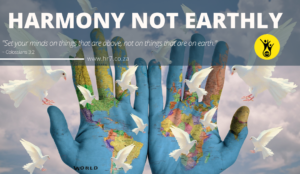 I must lay a good foundation for this Bible example of an earthly-minded behaviour pattern. John Mark’s mother was a godly, well-to-do widow in Jerusalem, and her house was a favourite meeting place for the saints (Acts 12:12; Colossians 4:10). Her brother, Barnabas, John Mark’s uncle, was a wealthy Levite from the island of Cyprus (Acts 13:1-5). In Barnabas, Mark had a staunch and gifted friend and counselor (Acts 11:24). While we are not told how or when Mark became a disciple of Christ, it is evident that he owed his conversion to Peter (1 Peter 5:13). After his conversion, he became Peter’s close companion for about twelve years.

Mark became an attendant of Paul and Barnabas when they set out on their great mission tour (Acts 13:5). These two godly men must have had a formative influence upon the character of Mark. However, our next glimpse of him is disappointing. In the early years of his service, he was guilty of vacillating (Acts 13:13 and 15:38). He looked back. He failed Paul and Barnabas in an hour of crisis.

History seems to indicate that Mark could not handle the hardships of mission work and longed for the comforts of the wealthy home of his mother. The ministry was arduous. His abandoning Paul and Barnabas on the front line of battle served to sever their friendship.

His mind-set sent Mark running back to the ease of his Jerusalem home. That is typical of the earthly mind. It does not like to be inconvenienced. It wants the benefits, but none of the difficulties. It wants the easy road but does not want the hard road.

The good news is that John Mark was restored. The years the locusts had eaten were restored and he became a colleague of Paul (Colossians 4:10; Philemon 24 and 2 Timothy 4:11).

The earthly-minded person has a propensity for materialism.