THE CAUSE OF OTHERWISE MINDED

Otherwise mindedness is caused by a familiar spirit (1 Samuel 28:7). This interesting and elusive mindset is mentioned in Galatians 5:10, which says:

“I have confidence in you through the Lord, that ye will be none otherwise minded: but he that troubleth you shall bear his judgment, whosoever he be.”

“Likewise also the good works of some are manifest beforehand; and they that are otherwise cannot be hid.” 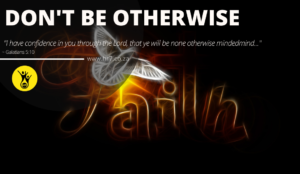 This is the mind that has believed lies, in particular, religious lies. They are shrouded in half-truths. To be otherwise minded is a pestilence to the religious. Numbers 22-

24 and Deuteronomy 23:4 tell us about the prophet Balaam. Peter, Jude, and John deal with Balaam as a historical presence (2 Peter 2:15, Jude 11; Revelation 2:14). Balaam has a head full of light but a heart full of darkness. Though he was considered a prophet, he followed the practices of Eastern soothsayers. This is the man who, after the price was right, accepted the invitation of Balak, King of Moab, to pronounce a curse on Israel.

Balaam is the man who is famous for hearing the ass upon which he was riding speak. While he was on his way to curse Israel, an angel of God stood in his path. Balaam did not see the angel, but the donkey did. The donkey stopped dead in his tracks, refusing to move even at the beating of his master. Finally, the donkey spoke to Balaam and Balaam answered. Astonished at what he had seen and heard, Balaam cried, “I have sinned!” At that moment, he knew his conduct was displeasing to God.

THE SIN OF AVARICE

What Balaam was about to do was for money. King Balak had bought himself a prophet of God. Balaam was self-willed (Numbers 22:5-22), saved from death by a donkey (Numbers 22:33), otherwise-minded (Numbers 23:24), a failure in his mission (Numbers 24:10, an evil counsellor (Numbers 31:16) and overcome by the sin of avarice, or extreme greed, (2 Peter 2:13). From this otherwise-minded man, we learn that knowledge without grace is worthless, sin is ruinous, especially covetousness, and the road to ruin is paved with good resolve.

Consider further the case of Eliphaz, the chief of Job’s friends (Job 2:11; 4:1; 15:1; 22:1; 42:7, 9). He was a religious dogmatist. He based his dogmatism on one religious experience he had had with a spirit passing before his face, causing his hair to stand up (Job 4:12 – 16). As a result, he felt he had a special message from God to deliver. In his hard, cruel, rigid, dogmatic message, he tried to press Job into the mould of his own experience. He suggested that Job was suffering because of his sins (Job 15:16). In his second appeal to Job, he actually charged Job with sin (Job 22:5).

He was religious but wrong. Many otherwise minded religious folks today have built the entirety of their ministry and lifestyle on some very weird physical and emotional experiences. That is such a truly accurate description of the otherwise minded.

Addictions of particular vulnerability to the otherwise minded are religion, legalism, cults, and the welfare mentality.