THINK FORWARD ONLY IN CHRIST

In this post, you will find out more about the mind-sets caused by evil spirits. We have looked at the high-minded and the carnally minded. Here we look at the shortcomings of the forward mind. 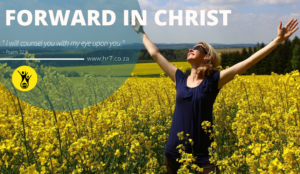 WHAT CAUSES THE FORWARD MIND?

The forward mind is caused by the spirit of bondage (Romans 8:15) and is mentioned in 2 Corinthians 9:2:

“For I know the forwardness of your mind, for which I boast of you to them of Macedonia, that Achaia was ready a year ago; and your zeal hath provoked very many.”

BE A STARTER AND A FINISHER

The forward mind is impulsive. The Greek word is prothumia (prothoo-mee-ah). Pro (before) thumos (impulse). The impulsive mind is quick to start, but slow to complete. It is prone to bad judgment because it is impulsive. It is connected in the Corinthian passage with zeal. It describes the person who will become excited about something and act impulsively. However, this mind-set seldom follows through – a person with such a mind is a starter, but not a finisher.

JOAB – AN EXAMPLE OF THE FORWARD MIND

Our example of a “forward mind” is Joab. He was the son of David’s half-sister, Zeruiah. He became the most overbearing captain in his uncle’s army (1 Samuel 26:6; 2 Samuel 2:13).

Herbert Lockyer, the famous English Bible scholar, calls Joab “the man who was over ambitious.” The first person to be considered in Joab’s mind was Joab. What motivated his devotion to David was that he might have first place. He loved self. He murdered those who stood in his way (2 Samuel 3:27). He wanted a place of pre-eminence. He was a skilled military man but was vindictive and ruthless. He manifested abundant energy, boldness, ability, shrewdness, and common sense, but he never manifested any actual

faith in God. He apparently trusted more in providence than in the God of Israel (2 Samuel 10:12). His ‘forward mind-set” was full of self-confidence, ambition, and selfishness, but he never strayed very far away from his own interest.

Perhaps you know someone like Naphtali. He was the sixth son of Jacob. His mother was Bilhah, Rachel’s maid. He is distinguished as lacking self-control. Naphtali was a fluent orator, but as erratic as the wild gazelle (Genesis 49:21). He had little self-control. He ran through life aimlessly and without a goal. There was a wild extravagance in his career of wrong-doing that marred his influence and spoiled his life; he had a forward mind. Only through God’s grace can one of such a mind-set be restrained.

Then we have the classic example of Solomon who epitomized the “forward mind.” He was a man whom the Lord loved and to whom God had given unusual gifts (2 Samuel 12:24-25). Young Solomon was influenced both by his mother, Bathsheba, and Nathan the prophet (1 Kings 1:11-12).

However, because of his mind-set, Solomon stands out as a disappointing figure in Hebrew history. Uncontrolled sensuality made him a castaway. Solomon inherited his wealth from his father David. His work reflected the vision of his father for a united kingdom. He gave Israel a glory, prestige, and splendor unsurpassed in the world’s history. However, Solomon apparently ruled for his own aggrandizement and not for the benefit of the people. His lavish spending soon dissipated the wealth from his father for the building of the Temple.

THE FORWARD MIND AND SOLOMON’S DOWNFALL

His sacrifice at Gibeon indicated that Solomon desired external magnificence in his religious preference. Another indication of his impulsive mind-set was his marriage to Pharaoh’s daughter, which made her Queen of Israel. A daughter of Pharaoh sitting on David’s throne must have shocked the people. Naturally, with his pagan wife came her pagan gods. Nehemiah 13:26 talks about his harem of outlandish women who caused him to sin. His 700 wives and 300 concubines turned him into an idolater (1 Kings 11:1-8). Thus, sensuality, sexual perversion, and the pride of wealth brought about Solomon’s deterioration.

Solomon’s wisdom did not teach him self-control.

The potential addiction to which this mind-set would be vulnerable include work, eating, gambling, or success.