LIVE IN THE SPIRIT AND NOT THE FLESH 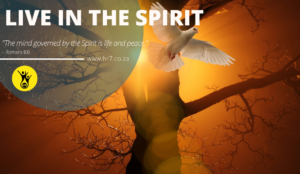 The mind – phronema (fron’-ay-mah) – means mind-set or aspiration. Carnally – sarx (sarx) – means fragile, the weaker elements in human nature. It is often used to describe the unregenerate state. It always refers to the externals of life. It is a mind not controlled by the Holy Spirit. It is a non-submissive mind.

Contrasted with spiritual qualities described in 1 Corinthians 3:1-4, which says:

“And I, brethren, could not speak unto you as unto spiritual, but as unto carnal, even as unto babes in Christ. I have fed you with milk, and not with meat: for hitherto ye were not able to bear it, neither yet now are ye able. For ye are yet carnal: for whereas there is among you envying, and strife, and divisions, are ye not carnal, and walk as men? For while one saith, I am of Paul; and another, I am of Apollos; are ye not carnal?”

THE STORY OF DEMAS

We find a good example of the fleshly/carnal mind in the Biblical character, Demas. There seems to be an indication that he was not fully trusted when he first hooked up with Paul (Philippians 2:20). The Scripture identifies Demas as the young man who forsook Paul when he and Epaphras were in jail in Rome (2 Timothy 4:10).

Before he met Paul, he was probably an agreeable young man, with no known vices. He was fascinated by the apparent glamour of Paul’s ministry. The thought of travel and crowds and attention intrigued Demas. Becoming a disciple, he was mesmerized, and became enamoured by the enthusiasm of sacrifice. He wanted to live and die with Paul, have a throne, a crown, and be hailed as a martyred saint.

However, when Demas came to the great capitol of the then-known world, Rome, with Paul and Epaphras, it was a different story. He was not in jail, but Paul and Epaphras were. He saw the contrast between the magnificent hall of Caesar, the homes of the rich and famous, and the glitter of the city that could be called a first-century Las Vegas. Such a setting cast its spell over Demas, and he yielded to its appeal. The darkness of the prison where his friends languished seemed pointless compared to the bright lights of Rome. Thus, Paul had to write:

“Demas hath forsaken me having loved this present world.”

Demas was a man of wavering impulse.

The fleshly, carnal mind would be particularly vulnerable to addictions like over- spending, problems with money and credit cards.