RECEIVE AND BELIEVE THE TRUTH

Christ vividly illustrated the Biblical Therapy Model in the Gospel of Saint Mark, chapter 7, verses 14 through 23. By studying the Greek meaning of the words He chose, and the context of His message, we will see why this passage is such an appropriate example of Biblical Therapy. The narrative begins with verses 14 and 15:

“And when He (Jesus) had called all the people unto him, He said unto them, Hearken unto Me every one of you, and understand. There is nothing from without a man, that entering into him can defile him: but the things which come out of him, those are they that defile the man.” 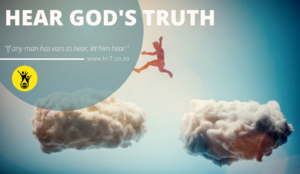 Christ had something of extreme importance to teach on this occasion. The Greek word akuo (ak-oo-o) is translated hearken in English. The word carries the meaning of one giving an audience to someone or something very important. It possesses a quality of hearing that transcends simply listening. The gravity of His message is further obvious from the fact that Jesus Himself called the meeting. It was not another of a long list of popular crowd responses to one of His miracles; this was His meeting with His agenda.

The word understand is suniemi (soon-ee-ay-mee) in Greek, which conveys the idea of putting something together. It is the process, for example, of gathering data that relates to something that does not make sense, collating and processing that information into an explainable, understandable whole. Something was so important that Jesus called a special meeting to clarify a distorted understanding in the minds of the people. He wanted them to change their belief concerning a distorted view they had. We can draw three distinct conclusions from verses 14-15:

The context of the story reveals what triggered His sense of urgency. In verses 1 through 13, we see that the Pharisees and the Scribes had objected to Jesus’ disciples eating with unwashed hands. In verse 5 (KJV), their question to Christ was:

“Why walk not your disciples according to the traditions of the elders, but eat bread with unwashed hands?”

­­­­ Jesus gave them a long explanation in verses six through 13. But I call

your attention to verses 9 and 13 in particular. In verse 9, Jesus said:

“Full well ye reject the commandment of God, that ye may keep your own traditions.”

In other words, Jesus was saying to the Pharisees, “You do what you do because you believe what you believe.” They believed generational religious lies (traditions) that formed their entire belief system. For generations, they had been taught a certain way and that is why they behaved the way they did. Remember that a lie is as strong as the truth if you believe it. This is Biblical Therapy’s second axiom: People do what they do because they believe what they believe.) In verse 13, He continued:

“Making the Word of God of none effect through your tradition, which ye have delivered and many such things you do.”

TRUTH MUST BE RECEIVED AND BELIEVED

The religious crowd of Jesus’ day, the Scribes and the Pharisees were doing the same thing the masses have been doing for thousands of years, i.e., substituting and accepting lies for the truth. The lies the Pharisees believed were religious and familial, which made them the most dangerous of all because they are the most believable. Generally speaking, the most trustworthy people are the clergy and our loved ones, or at least they should be. So the lies the Pharisees believed, acted on and taught others were the most insidious of all. No wonder Jesus was so adamant about refuting them.

In verses 14 through 23, Jesus provided us with the solution to exchanging the lies they

had been believing for the truth of God. After first explaining that the purpose of His meeting was to correct their distorted thinking, in verse 16 Jesus reemphasized the value and wisdom of what He was about to say. He said:

“If any man has ears to hear, let him hear.”

He was not talking about surface listening, but a hearing quality that is within the spiritual man’s ability to understand. It is more than listening, it is hearing and understanding. Truth must be received in the human spirit for it to have any effect on the lifestyle. Truth must be believed in the heart before it can change a person’s behaviour.

In verse 18, Jesus explained the difference between the external and internal man. Just as there is a quality of hearing that makes a difference, there is a quality of internal and external defilement that makes a difference. It is not what goes into a man that defiles him, but that which comes out of the man. The point is that people may be clean on the outside but filthy on the inside. What is on the inside will eventually surface. That is what defiles the man. The defilement emerges because it was there in the first place.

Jesus began in verse 19 to illustrate the quality of the internal man by identifying man’s belief system through using the word heart. He said:

“Because it entereth not into his heart ….”

He continued in verse 21 with:

“From within, out of the heart of man (his belief system) proceeds ….”

Therefore, the source for man’s thoughts, feelings and actions are what he believes: People do what they do because they believe what they believe.