Professor Dr. Timothy Leary is next in line for our look at the infamous men responsible for propagating and spreading the Babylonian drug culture. Remember, those of you who have been following my previous posts, we are doing research on the global power called Babylon which is mentioned in chapter 18 of the Bible. Does such a power exists today and does the Bible warns us of its destructive influence on the human race? If so, how did it happen and who were the main role players? Well Timothy Leary, who was a noted psychologist, philosopher and author acted as the high priest who married psychedelic drugs to the pop culture of the 60’s and 70’s. There was a direct line between him, Aleister Crowley and Aldous Huxley. He was not only a disciple of Crowley, he considered himself as Crowley reincarnated to complete the work he started. Remember Crowley died in 1947 and his greatest wish was to raise up an army of young people who would chase the Christian dogs into the sea.   https://www.youtube.com/watch?v=2gY3dSqs68A  for Leary’s statement during an interview.

Go to this link to check Crowley’s strategy through the young men of England. Who brought pop rock to the world attention but the Rolling Stones and the Beatles? http://hermetic.com/crowley/worlds-tragedy/alice-wesley-torr-or-aleister-crowley.html 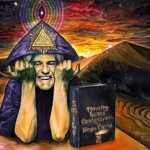 Here you can see how serious Leary was about his devotion to Aleister Crowley. 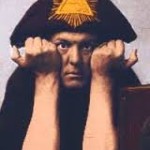 We do not want to digress and get back into either Crowley or Huxley as we have covered a fraction of the information on them in previous posts. However you must just realize that there was a very strong common bond among these three Satanists.

Here is an extract of a conversation between Huxley and Leary:

After he heavily induced himself with psilocybin, Huxley told Leary in a chilling conversation:

“‘Your role is quite simple. Become a cheerleader for evolution. That’s what I did and my grandfather before me. These brain-drugs, mass-produced in the laboratories, will bring about vast changes in society. All we can do is spread the word. The obstacle to this evolution, Timothy, is the Bible.’”

The late British psychiatrist William Sargant wrote, “Aldous Huxley, in his writings and in talking to me personally, insisted that mescaline had taken him into the presence of God.” Leary declared, “I am a revolutionary, and the faster this system [the culture and the Christian ideals upon which it was built] goes down the happier I’ll be.  These insights into the agenda of these men are found at the following link:    http://www.veteranstoday.com/2013/06/24/aleister-crowley-and-the-drug-revolution-part-i/

Timothy Leary was an only child born into a Catholic Irish home in Massachusetts USA and his parents divorced when he was 13. After High School he entered a Jesuit college known as College of the Holy Cross. On his fathers insistence he was accepted as a cadet in the United States Military Academy in West Point where he did not do well at all due to unruly and undisciplined behaviour. He was court-martialed eventually and discharged from the Army. He entered the University of Alabama and took an interest in psychology and biology but there too ran foul of rules and regulations for being caught in the female dormitory and was expelled.

In January 1943 he was drafted into the Army and received training as a non-commissioned officer. He enrolled for an extended academic program with psychology as a major and attended external classes at Georgetown and Ohio State Universities.  There he was suspended and finally graduated through Alabama University via correspondence in 1945. When the war ended he was discharged as a sergeant then took up further academic training to eventually earn as Masters and then a Doctorate in Psychology.

After enrolling in the University of Alabama course for Reserve Officers Leary was making real good progress with is studies and earning top grades. However his lust for adventure and ladies got him expelled for visiting the girls dormitory late at night. As a result he lost his student deferment and was drafted back into the Army. He reported at Fort Eustis in 1943. He remained a NCO and enrolled in an extended academic program for psychology majors that included external studies at Georgetown University and Ohio State University. More complications eventually forced him to complete his degree via correspondence through Alabama in 1945. 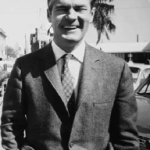 From 1950-1955 Leary stayed on at Berkeley as assistant professor, but despite his potential professional success things were not well at home in his marriage with Marianne and his two children. Apparently his adventurous spirit still led him to the beds of other woman and both him and Marianne were consumed generous amounts of martini.

When the War was over Leary pursued an academic career in psychology an earned Masters at Washington State University and a PhD in clinical Psychology at University of California, Berkeley in 1950. He described himself during this period as “an anonymous institutional employee who drove to work each morning in a long line of commuter cars and drove home each night and drank martinis … like several million middle-class, liberal, intellectual robots.” Marianne eventually committed suicide in 1955 and Leary had the two kids to raise by himself.

For the next three years Leary was the Director of psychiatric research at the Kaiser Family Foundation and his greatest dream was to write the ultimate novel on the American Dream. To pursue this he left the USA and relocated to Europe trying to survive on research grants and insurance pay-outs. Almost poverty stricken he was forced back to the USA and took a job in 1959 as a lecturer at Harvard University, Massachusetts. He also got involved and oversaw the Harvard Psilocybin Project with assistant professor Richard Alpert, later known as Rass Dam under his Hindu name. This is how that came about…… 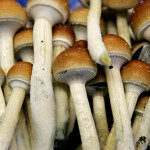 In August 1960 Timothy Leary travelled to Mexico on the recommendation of Anthony Russo a colleague of Leary who had been experimenting psilocybin mushrooms. It was a life changing experience tripping on the stuff. He described this experience in 1965 as follows:  ” I learned more about … (his) brain and its possibilities … [and] more about psychology in the five hours after taking these mushrooms than … in the preceding 15 years of studying and doing research in psychology.”

Leary and his associates at Harvard were out to prove that there was a whole lot of merit in the use of psychedelic drugs, in terms of psychotherapy as the drugs at that time was not yet illegal. Judging by later events I personally don’t think that the legal status of psychedelics would have made any difference anyhow. When a prominent poet by name of Alan Ginsberg joined the tripping club, his enthusiasm carried the thing a whole lot further. They went onto an active campaign to promote this mind blowing experience with as many intellectuals and artists as they could find. According to Leary’s autobiography Flashbacks, after 300 professors, graduate students, writers and philosophers had taken LSD, 75% reported the experience as one of the most educational and revealing ones of their lives.

Things got so hectic that Leary eventually had to break ties with the Academic world, but much of the damage was already done. There were numerous spinoffs from having connected with timothy Leary and he was fast becoming a household name, not just in the USA, but wherever the counter culture of the Hippy Movement was popping up….. almost like mushrooms in the forest after heavy rains. True to Huxley’s prophecy, Timothy Leary was spreading the word about a new drug induced, psychologically inspired New Age religion. Like the disciples of Crowley before and after him, much can be said but space does not allow it. Maybe I should write a book…..what do you say?

In October 1966 LSD and all other psychedelic drug were declared illegal in the USA. All legal research programs were shut down including those conducted at Universities and the US Military as well as CIA.

Leary in the meantime had gained much ground and was appearing at debates, TV and Radio interviews. He has become an unofficial guru to many different groups of the counter culture Hippy Movement. In 1967 he and his merry band of trippers gained access to a mansion on the Millbrook Estate from where they launched many of their psychedelic awareness and distribution campaigns.

After numerous raids by the FBI that had to let go of the property after five years of constant “happenings” LSD induced networking connections, and much more. Ken Kesey and the Merry Pranksters swung by there as well as Aldous Huxley. It was also the birth place of the Eternal Brotherhood of Love, also known as the Hippy Mafia. These guys were ex-surfers and bikers and through their contacts another very important chain of distribution was opened with the nationwide Hells Angels.  Leary even founded an organization called the League of Spiritual Discovery through which they fought for the use of psychedelics on religious grounds. Timothy Leary was all over the country but so was the Law on his tail.

His first bust came in /December 1965 with a marijuana possession at the Mexican border. Then again in December 1968 also for possession of Mary Jane. He was convicted in January 1970 and sentenced for 10 years. The 1965 case came up and he received another 10 years concurrently. At the prison he manipulated the psychological tests through which he was assigned to a low security gardening facility from which he escaped. Members of the Brotherhood paid the Weatherman a fee of $25000 to smuggle him and his wife Rosemary out of the USA. They first landed in Algeria, fled from there to Switzerland, broke up, he got involved with a very rich socialite, used her money and name, travelled to Vienna, then Beirut and ended up in Kabul. In Kabul things went wrong and he was arrested on an airplane by an agent of bureau of Narcotics and Dangerous Drugs in 1972.

He spent two years of his 95 year sentence after having been dubbed by Pres. Nixon as the “most dangerous man in America”. He continued writing while in prison but had transitioned from Eastern Philosophy and Aleister Crowley to a belief that outer space was a medium for spiritual transcendence.

Influence in Pop and Counter Culture. 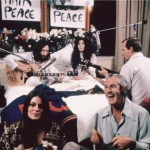 This man had enormous impact on intellectuals, artists, writers, musicians, actors and even politicians from all parts of the USA and abroad. He inspired many songs, movies and stage productions and really knew how to evangelize those gifted people who impact the minds of the masses. He knew how to even grab the limelight from such luminaries as John Lennon and Yoko Ono when he appeared with them at events. Satan really knows how to pick them and use them and then disgrace and discard them.

After his release from prison he was quick to get into the limelight by marrying his fifth wife Barbara Chase/Blum a filmmaker and sister of actress Tanya Roberts. He also adopted actress Winona Ryder as his godchild. He also teamed up with the Watergate burglar and radio talk/show host Gordon Liddy and went on a very popular and lucrative road show. They debated anything of national interest at the time. Because of his past fame he was invited to A-list parties and famous actors like Johnny Depp and numerous rock stars wanted to be seen with him.

Timothy Leary died of prostate cancer in May 1996 at age 75 with the belief that he would not be resurrected. Seven grams of Leary’s ashes were launched into outer space on April 1997 where it would remain in orbit for six years and then burn out. Bad news for him is that he will be resurrected to stand before the throne of God and to give an account of his servitude to Babylon and its god Satan.