Chronologically Aldous Huxley should be placed between Carl Jung and Israel Regardie, but I changed this on purpose as Huxley influenced a different sphere of society than the latter named Regardie. Whereas Regardie worked in the higher echelons of occult circles integrating much of it with  psychology, Huxley’s greatest influence was in the literary field. He was a British writer born of a very influential family. He was the grandson of the famous Thomas Henry Huxley: the son of Leonard Huxley the Editor of the Cornhill Magazine: and the brother of Sir Julian Huxley. He was educated at Eton and Balliol and before devoting himself to his own writing, was a journalist and drama critic. TH Huxley was a famous biologist also known as “Darwin’s Bulldog” for his defence of Charles Darwin’s theory of evolution. Both these men were self-confessed atheists and very high up in Freemasonry.

As the Huxley’s were true blue blooded aristocrats and due to the fact that so many high up Masons made reference to Aldous’ writings, it remains very probable that both he and Julian were up to their ears in Freemasonry.  http://www.innerquest456.org/essays/rhetoric_and_and_the_masonic_oligarchy.pdf  see 4 th par. page 1. 3rd par page 2. 2nd par page 3. In fact there are 7 references made by a 33 degree Mason. Also check out this link; http://www.freemasons-freemasonry.com/manasseh.html under the 3rd paragraph in the subtitle named Mysticism as well as under the subtitle Judgment 2nd par. below the diagram. In the Bibliography the author also refers to two of Huxley’s most famous works namely Heaven and Hell and the Doors of Perception. More about this later. 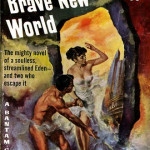 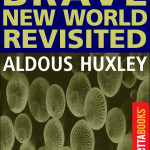 Huxley’s most influential work was titled Brave New World in which much of his own universal humanistic philosophy is recorded. He wrote it in 1932 as a sort of science fiction parable in which the future of the world is depicted as a one world dictatorship under the control of one man. Every person lives in his own utopia and central to the theme is a drug called Soma. As a high school boy I was fascinated when I read it the first time. It seemed to make so much sense little did I realize the far reaching impact it would have on my own spiritual journey later on in life. Little did I realize how indirectly Huxley impacted most of us who became Hippy’s here in South Africa, through the music of Jim Morrison and the Doors. In 1956 Huxley re-wrote Brave New World under the title Brave New World Revisited.  In as little as 25 years his sci-fi story had taken on a strong resemblance  of reality. Let me quote him; ” The most distressing thing that can happen to a prophet is to be proved wrong; the next most distressing thing is to be proved right. In the twenty-five years that have elapsed since Brave New World was written, I have undergone both these experiences.” (Chapter 18, 1956, Moksha ISBN 0 14 00.4919 3).

In between the writing of these two books covering the same issue concerning the future possible state of the world, another very significant turn of events took place in Huxley’s life.

In 1936 brainwashing was a subject that intrigued Huxley greatly and to which he returned again and again. With the rise of Fascism in the 1930’s Huxley felt compelled to write a rather long essay on the matter of using chemicals to change the masses minds. He had the following to say;

“The propagandists of the future will probably be chemists and physiologists as well as writers. A cachet containing three quarters of a gramme of chloral and tree -quarters of a milligram of scopolamine  will produce in the person who swallows it a state of complete psychological malleability, akin to the state of a subject under deep hypnosis. Any suggestions made to the patient while in this artificially induced trance penetrates to the very depths of the sub-conscious mind and may produce a permanent modification in the habitual modes of thought and  feeling.”

This is a very important snippet of new we cannot leave out as it links up with another major role player who would exercise profound influence on the Rock stars who would follow. In 1952 Huxley wrote a book called The Devils of Loudon, a brilliantly detailed psychological study of a historical incident in which a group of 17th-century French nuns were allegedly the victims of demonic possession. This was later adapted into a film by director Kenneth Anger.  Do not forget his man’s name as it would pop up in a later post explaining the growth of Satanism along with the exploding drug culture of the 70-80’s

In 1953 a very interesting meeting was to take place between a Dr Humphrey Osmond and Aldous Huxley. Dr Osmond was a research psychiatrist studying the relationship between mescaline experiences and schizophrenia. In a series of letters between the two the possibility of Huxley obtaining mescaline from Dr Osmond and taking it under his supervision became a matter of intense and serious discussion. I have the frotune of reading these letters in the Moksha book in my study. Under the heading May Morning in Hollywood  of the same book Chapter 8, Dr Osmond recounts the day he arrived at Huxley’s house to seal the deal. With him he had a 0.4 g dose of mescaline. For the next 10 years they became close friends up until Huxley’s death. The influence was reciprocal and what Huxley observed in 1936 had become another reality as psychiatrist and writer merged their ideas on the future influence of mind altering chemicals. Bear in mind also that Dr. Osmond was a noted member of the American Psychiatric Association and Huxley even accompanied him to their meetings. Be that as it may, on that May morning in Hollywood, the mescaline trip that Huxley experienced, gave birth to a book he wrote called Doors of Perception. During the following 10 years Huxley made a point of using psychedelic drugs to clear his mind’s doors of perception.

Another interesting point is the influence Aldous Huxley would have on the Rock artist Jim Morrison. He named his band the Doors and much of what he sang about related to the influence of  red Indian spirits that would possess him while performing when under the influence of psychedelic drugs and alcohol. 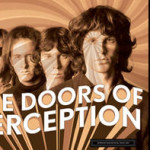 In 1958, following on Brave New World Revisited Aldous Huxley explains more clearly the difference between the drugs used in Brave New World (BNW) of 1932 and that of the 1956 version. In the first case it was a political tool to control the masses; whereas in the latter it has evolved into their religion. He states it as follows;

“Religion, Karl Marx declared, is the opium of the people. In the Brave New World this situation was reversed. Opium, or rather soma, was the people’s religion. Like religion, the drug had power to console and to compensate, it called up visions of another, better world, it offered hope, strengthened faith and promoted charity.”

The conclusion he reaches further on is that a world dictator could make different drugs available to the people which would cater for each and every mental, psychological and spiritual need and so keep them happy in the servitude to the State he controls. He goes into detail as to how he sees the chemical manipulations being put to the use of the World Controllers to keep everyone in their place so to speak and to even help them enjoy it. I want to conclude this piece with the following quote;

“Meanwhile pharmacology, biochemistry and neurology are on the march, and we can be quite certain that, in the course of the next few years, new and better chemical methods for increasing suggestibility and lowering psychological resistance will be discovered. Like everything else, these discoveries may be used well or badly. They may help the psychiatrist in his battle against mental illness, or they may help the dictator in his battle against freedom. More probably (since science is divinely impartial) they will both enslave and make free, heal and at the same time destroy”.

IN EVERY SENSE OF THE WORD, THESE WERE SELF-FULFILLING PROPHECIES.

In 1959 Aldous Huxley addressed an audience of highly placed academics and scientist during a conference at the University of California. According to his letters to various people he had been travelling and lecturing extensively for the preceding two years with many radio and TV appearances thrown in to boot. He was a sought after speaking and a man on a mission. Huxley defined “his task” as a man of letters, to create a bridge between science and the general world. He noted the superior ability of writers to describe the effects of drugs on the mind, and hoped that a language would ensue that would enable people to talk about mystical experiences simultaneously in terms of theology, of psychology and of bio-chemistry. What he thought  would take several hundred years in terms of his prophecies in BNW was a reality just after twenty-five. In fact Wallace laboratories had put a drug on the market by the name of soma by the time he addressed the conference at California. As he was warning them about the prophecy made in 1936 concerning pharmacological attack on the human race referred to above, he did not realize his own role in bringing this to bear. He was in fact one of the major writers who was propagating the use of mind altering drugs. 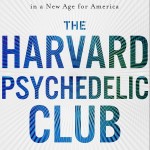 In 1960 there was a very weird and interesting project running at Harvard University. It was run by a professor Timothy Leary who headed up the Psychology Department. It was called the Psychedelic Research Project and guess what was happening?  The honourable professor and some of his more outgoing and adventurous students where tripping on psychedelic drugs as part of a psychology research project. Someone approached the prof to enquire if he was familiar with the work of Huxley and handed him two of his books namely Doors of Perception and  Heaven and Hell.  After not being able to put the books down and having re-read them several times, the professor realized that Huxley shared the same vision as he did. Not long afterwards a lunch meeting was arranged and a fairly close working relationship was formed. Huxley obviously got involved in the project an d became a powerful force in giving it direction towards pouring his ideas into the next generation. He hit on yet another strategically important target for his psychedelic propaganda.

The End of his Vision. 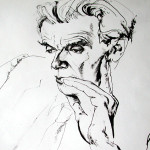 In the years to follow Huxley continued to travel and promote the psychedelic visionary experience promoting mind altering drugs as part of a religious trip interwoven with eastern mysticism, secular humanism and psychology. When one reads his work you cannot deny his sheer genius, intellectual power and command of literary art. Yet what a tragic death! Even though he was never afraid to quote from the Bible and to make reference to God and Christ he clung to his belief in man as his own saviour, worshipping his own mind as a god and denying the salvation offered on the cross of Jesus Christ. Through it all he was a kind and generous man respecting the views of others yet he was totally lost and deceived because of his own intellect. it is significant to know that he first contracted cancer of the tongue, overcame that and later succumbed to cancer of the throat. His final request ironically was in writing which read “Try LSD 100u intramuscular”. He wanted to leave this life tripping on LSD hoping it would make his transference into the Other World easier. How little did he know……….