Drug Addiction – Its hard to believe 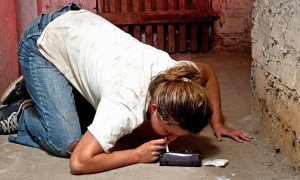 It has been more than 25 years that I have been counselling drug addicts. As a result one has heard some really unbelievable stories. Stories about teenagers stealing from their parents cars and selling it for almost nothing to illegal immigrants for a weekend of binging on crack. One mother had to repossess her car three times from drug dealers and each time it came back in a worse condition, missing sound equipment, spare parts and so forth. We even once had a mother whose son tried to drown her in a bath and then the toilet because she refused to give him any more money for cocaine. Some of the stories are so weird one could hardly believe them to be the truth.

We had numerous so called “hostage” situations when distraught parents would receive threatening phone calls from dealers who promised to cut limbs from their children if they did not come and pay some drug debts. In some cases when we have sent in an extraction team the guys would find the “kids” happily smoking it up with the dealers. Callously their own sons and daughters would extort their parents hard earned cash to party with their suppliers. People have really done the most irresponsible things just to get high.

I recently dealt with a case where one guy spent two years in jail after selling a company car to dealers for less than R5000 worth of crack. He was sent to our centre on probation but we eventually had to expel him for breaking the evening curfew when he sneaked into the girls section a couple of times and got caught. A few weeks later he got a job as a sales rep and behold went and repeated exactly the same crime. He was in his late thirties and while on our program he used to bemoan the fact that drugs had cost him so much in the past. He has an estranged child somewhere and had to start all over once more in life yet he goes and messes up every chance he gets in life.

Just recently we had two cases that really freaked me out. One was a young girl who had been in several rehabs without success. She was really totally confused about her identity as a girl and arrived here blind drunk. She spent 4-6 months here on and off, running away several times and being brought back high and verbally abusive to all. We tried everything we knew to turn her around. At times she seemed to co-operate. A few times she even dressed nicely and wore a bit of makeup. Recently she just broke a whole bunch of rules and we expelled her from the program. Our girl section was full and my reasoning was fair, her parents had stopped contributing to her stay a long time ago and I would rather make place for someone who wanted to come right. She obviously told her folks a totally different story and we were forcefully challenged why we put her off the program unfairly. A few days later her father returned with her to fetch the last of her things. While in the room she gave heroin to another girl who used it that night on our premises. This girl is the real tragedy I want to speak about.

She was brought here by a good Samaritan. She was strung out on heroin and six months pregnant with another addict who was in jail for shoplifting. She has been on the junk for many years and literally been begging on the streets for her daily fix. We had to lock her up at first and she once tried to force herself through burglar bars despite her bulging belly. Several times she tried to abort and once our secretary had to induce vomiting as she swallowed some pills she stole. Much prayer and counselling was spent with her and then she turned around nicely. Two months later you could hardly recognize her the way she improved. She asked to spend a night at her mom’s place to prepare a room for the birth of her little girl. She promised to take special care not be exposed to temptation. When she came back yesterday morning one of our workers, himself an experienced ex-heroin addict was suspicious. After careful questioning it all came out. She had phoned her dealer on getting to her mother’s place and injected heroin twice after smoking the stuff she got from the other girl the previous night. The fact that she was more than 8 months pregnant did not deter her even after being clean for two months. All the time she was planning on using the moment she got out of our care. The fact that she is endangering her child is of little concern to her. The fact that people were preparing a baby shower and others were sponsoring her treatment was of even less concern. She still preferred the rush of the heroin above the life of her child. We obviously have to report this case to child protection and we will continue to pray for her, but can no longer help her.

Cases like these are hard to believe but are yet part of the reality of what is going on in this crazy world we humans have created for ourselves.

If you have a passion for people like this please join our cause on face book.

May God have mercy on us and thank you Jesus for paying for our guilt.